TUSC branches out and forms Satellite program in Portland

The PSC has operated an all-volunteer competitive program called PSC SELECT from 2012 to 2017. The program encompassed the U9 and U10 age groups primarily while providing U11/12 teams twice in that time frame. Teams that have been formed have all been “mixed” in age groups across two and even three years for some teams. An average number of competitive players available in an age group in the Portland area has been around five (5) making it difficult to be consistent in offering teams competitively appropriate for each player. Another issue for PSC SELECT has been the availability and qualification of coaches.Meanwhile, Tennessee United Soccer Club was created in 2004 for the purpose of offering a stable, professional program for the development of young soccer players in our area. TUSC has shown interest in raising the level of soccer participation and quality throughout Sumner County (and surrounding area). PSC entered into an agreement with TUSC in 2017 that would provide competitive opportunities for our younger players through a program called TUSC North based in Portland, Tennessee.TUSC North encompasses young players in the U9 and U10 age groups. The players all train in Portland at Richland Park but are fully part of the TUSC U9/U10 Academy offering opportunities for competitive competition in the middle Tennessee area. 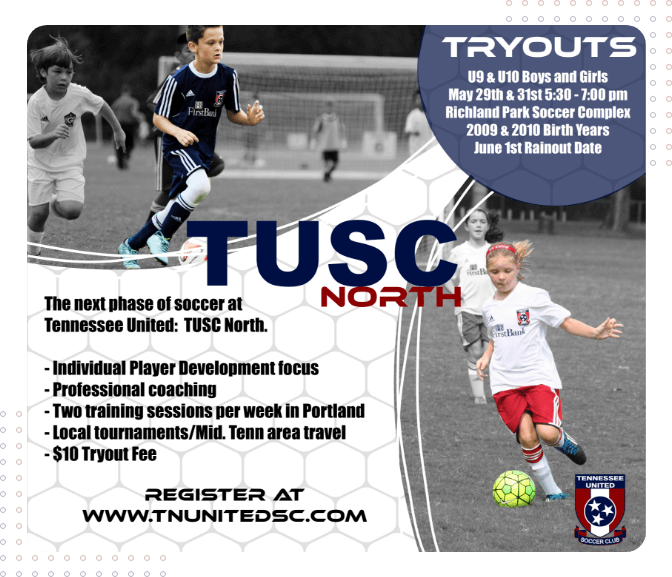 A key difference in PSC SELECT and TUSC coaches is the support and dedicated development offered by the TUSC organization. Consequently, the coaching staff of TUSC is compensated monetarily.